Jesus, I trust in You 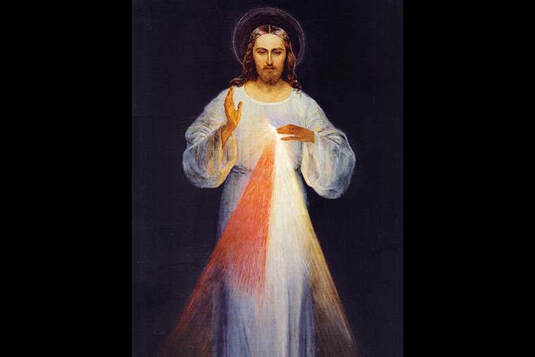 Original painting of the Divine Mercy, by Eugeniusz Kazimirowski in 1934
Per Wikipedia:
The Divine Mercy is a devotion to Jesus Christ associated with the apparitions of Jesus to Saint Faustina Kowalska. The venerated image under this Christological title refers to what Faustina's diary describes as "God's loving mercy" towards all people, especially for sinners.

Saint Faustina was granted the title "Secretary of Mercy" by Jesus himself and by the Holy See in the Jubilee Year of 2000.  Sister Kowalska reported a number of apparitions during religious ecstasy which she wrote in her diary, later published as the book Diary: Divine Mercy in My Soul. The two main themes of the devotion are to trust in Christ's endless goodness, and to show mercy to others acting as a conduit for God's love towards them.

Pope John Paul II, a native of Poland, had great affinity towards this devotion and authorized it in the Liturgical Calendar of the church. The liturgical Feast of the Divine Mercy, is celebrated on the first Sunday after Easter. Worshipers of the Divine Mercy commemorate the Hour of Mercy (3 PM), the hour when Jesus died for us.

Another very popular form of the devotion is the Chaplet of the Divine Mercy. The Divine Mercy message highlights that God is a God of both mercy and justice. Jesus told Sister Faustina that those who run away from His merciful Heart will fall into the hands of His justice (entry 1728). With regard to Purgatory, He told her, "justice demands it" (entry 20). The devotion is believed to be the preparation for the end time.